TRANSCENDENCE, HANDICAP AND HOPE ARE THE THEMES IN FILMS PRODUCED BY FILMS WITH A PURPOSE “FERGUSON RISES”, “I’M NOT SPECIAL” AND “PASSAGE” BROADCASTING SEPTEMBER 17-23 – Los Angeles Sentinel | Los Angeles Sentry

TRANSCENDENCE, DISABILITY AND HOPE ARE THE THEMES OF THE FILMS PRODUCED BY FILMS WITH A OBJECTIVE “FERGUSON RISES”, “I AM NOT SPECIAL” AND “PASSAGE” SCREENING FROM SEPTEMBER 17 TO 23

In September, Films With A Purpose (FWAP), an initiative of Sandra J. Evers-Manly, president and founder of the Black Hollywood Education and Resource Center (BHERC), has a mission, a campaign to encourage the public to attend and support the screenings of three formidable, impactful and diverse films by emerging independent filmmakers. “Ferguson Rises”, “I’m Not Special” and “Passage” will screen daily at the Laemmle Monica Film Center, 1332 2nd Street, Santa Monica, CA 90401, from Friday September 17 to Thursday September 23, 2021 Login to buy tickets online at https://www.laemmle.com/theater/monica-film-center.

About films and filmmakers 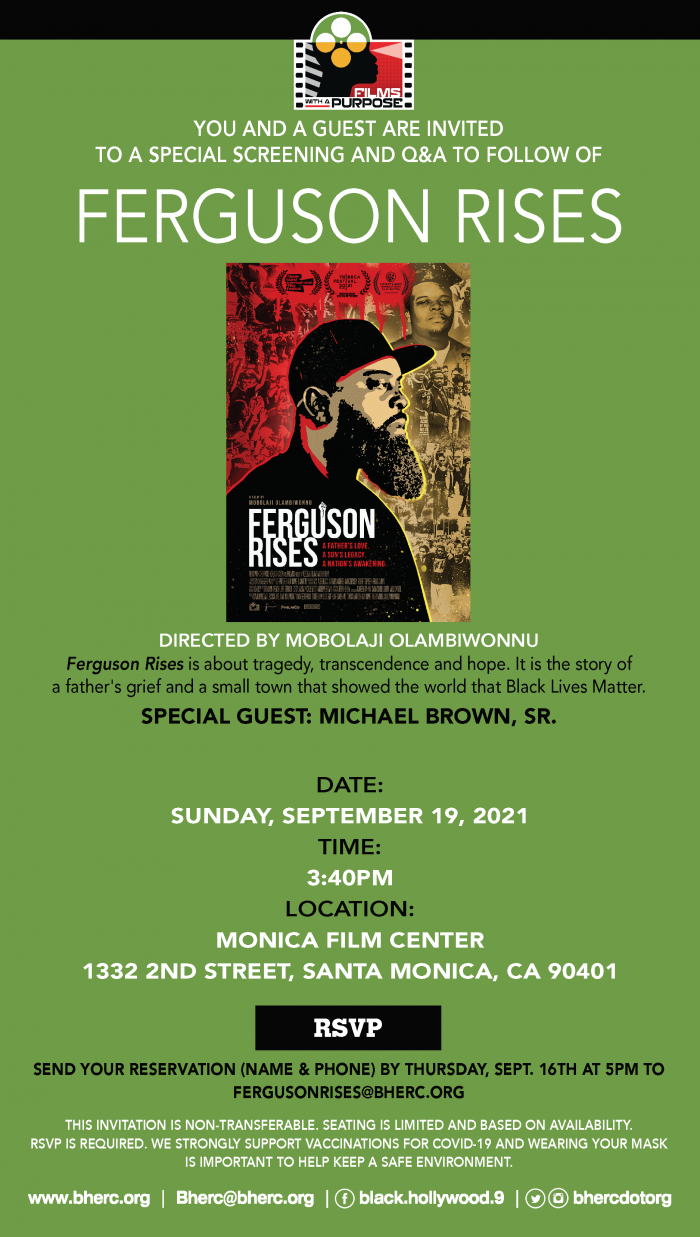 “FERGUSON RISE” (Documentary length) Mobolaji Olambiwonnu, director / producer (Tribeca Film Festival 2021 winning online documentary) – Before the explosive global uprising condemning the murder of George Floyd, there was a small town in Missouri that erupted in protest after on August 9, 2014, killing
of unarmed black teenager Michael Brown Jr. by a white cop. â€œFERGUSON RISESâ€ is a story about tragedy, transcendence and hope. It is the story of the heartbreak of a father and a small town that propelled the Black Lives Matter movement to international notoriety and inspired a new global civil rights movement. TO
understand this present moment, and we need to understand what happened in Ferguson. “Ferguson Rises” is
a powerful reminder that, although the specifics may differ, the struggle for human rights is universal.

Mobolaji Olambiwonnu is a graduate of UCLA and AFI. He is the recipient of the Directors Guild of America Student Filmmaker Award. In addition, Olambiwonnu screened his film as part of the Kodak Emerging Filmmakers Showcase at the Cannes Film Festival in 2002. In addition, he won 2 Hermes Awards for six commercials he produced for the new 1.8 billion railway line. dollars from the Los Angeles subway to LAX airport. . In addition to freelance film work, as a producer, cameraman and director for companies and organizations such as Lions Gate, Paramount, Discovery and HBO. Mobolaji has also worked in education, conflict resolution and community organizing. His community experience is not only the conscience behind his work, but the driving force behind his cinematic choices. Olambiwonnu’s goal is to use cinema as a tool to share diverse cultural and political experiences, criticize the superficial conditions that divide us and emphasize the merits of getting rid of our prejudices. “Ferguson Rises” is Mobolaji’s first feature film. 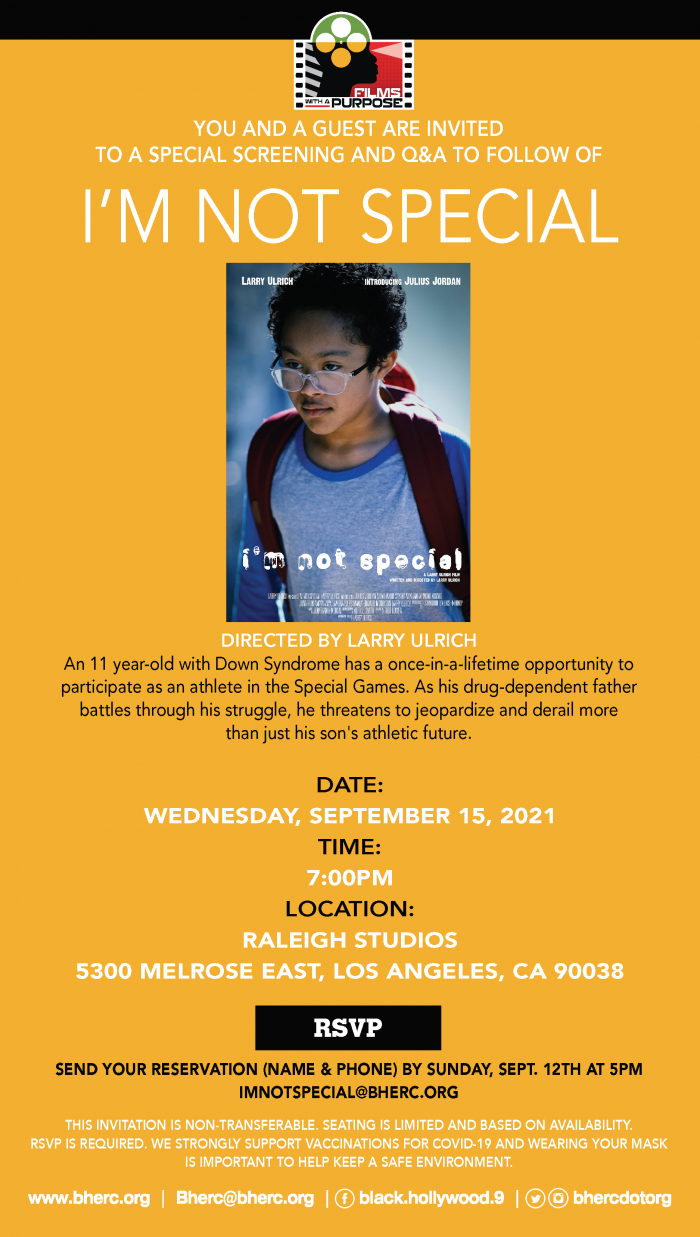 “I AM NOT SPECIAL” (Short film) Larry Ulrich, Writer / Director – An 11-year-old with Down syndrome has the unique opportunity to participate as an athlete in the Special Games. As his drug addict father fights in his struggle, he threatens to compromise and derail more than his son’s sporting future. Since birth, the star of the film has been Julius Jordan, a determined young man suffering from hypotonia (low muscle tone) from Down syndrome who quickly grew stronger. He became very active as a little boy who by the age of 5 was able to do ten crunches, with some support, on a balance ball, enjoyed rock climbing and his physiotherapy sessions. Julius is an actor who continues to be active, playing with his dog, video games and all kinds of sports such as soccer, basketball, swimming, surfing and his new favorite football.

Larry Ulrich is an award-winning American actor, director, producer, screenwriter and CEO of Ulrich Entertainment Group (UEG). Proactive and passionate about making films that make a difference, Ulrich is a creative, hardworking and ambitious filmmaker full of exciting stories. His poignant shorts have been applauded by audiences and critics for focusing on often overlooked themes and societal figures, with a particular emphasis on inclusion, tolerance, overturning stereotypes and promoting understanding. deeper. He is committed to â€œbeing the changeâ€ through his touching goal-oriented films. Larry holds a Master of Arts in Social Entrepreneurship and Change from Pepperdine University and a Bachelor of Arts in Public Affairs from Huston-Tillotson University, an HBCU in Austin, Texas. 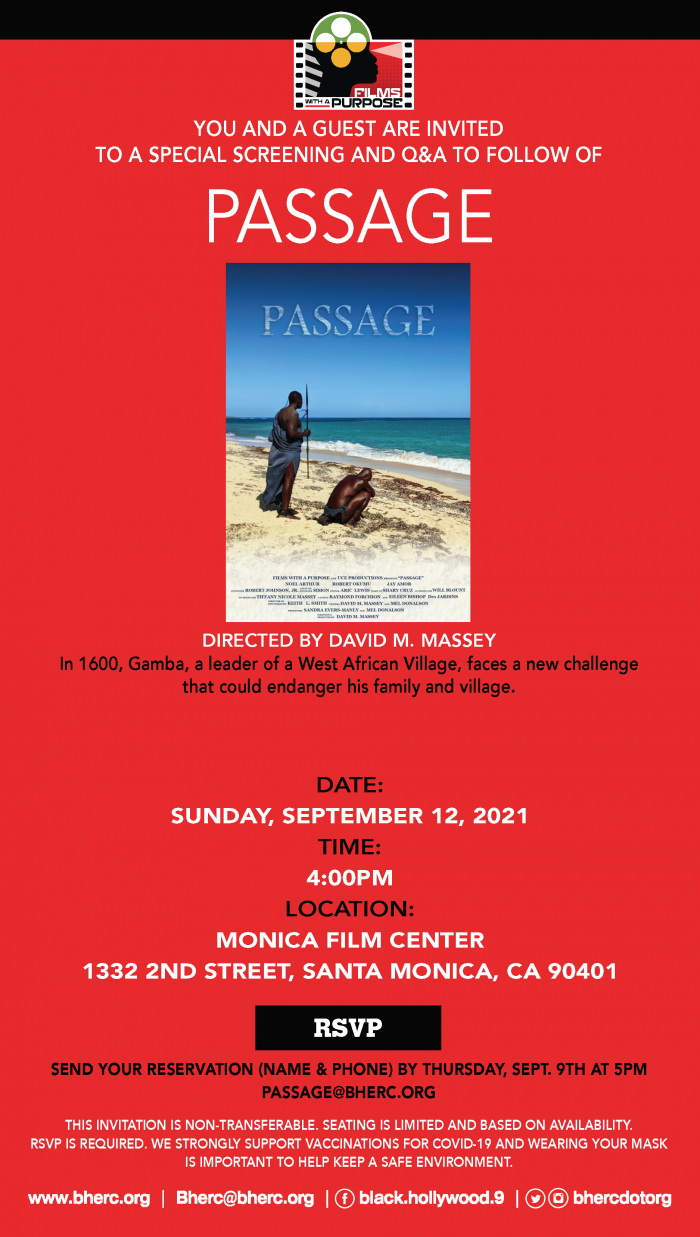 “PASSAGE” (Short film) David Massey, Writer / Director – It’s a story that has never been told before and looks at Africa from a different perspective. Located in 1600 in West Africa, “PASSAGE” takes you on a journey through the eyes of Gamba, the village chief. It starts one morning as everyone goes about their daily chores. One particular day, however, Gamba faces a new challenge that could endanger the existence of the entire village community. Understanding the needs of his people, everyone, especially his family, relies on him to survive.

David Massey is an Oscar nominated filmmaker, “Last Breeze of Summer” and the first African American nominated in the Live-Action Short Film category. In addition, Massey has received several prestigious awards. The Martin Ritt Fellowship, Eastman Kodak Second Century Honoree, Black Filmmakers Hall of Fame Inductee, The National Education Association for “Advancing Broadcast Learning,” the 2011 PBS Innovated Teacher Award, the National Black Programming Consortium ” Prized Pieces, â€Crystal Heart from the Heartland Film Festival and is a voting member of the Academy of Motion Picture Arts and Sciences. He holds a Bachelor of Arts in Communication and Education from Ohio Dominican College and a Master of Fine Arts in Advanced Film and Television Studies from the American Film Institute.

FWAP recognizes that many independent films never get the chance to be viewed beyond the festival circuit for a number of reasons. Mainly because of the costs associated with booking a theater. BHERC has supported and funded filmmakers in particular for over thirty years. However, FWAP production is a relatively new enterprise. But very necessary in the effort to complete and fully support a film. Thanks to funding from a fervent philanthropist and founder of the Evers-Manly fund, FWAP has fully or partially funded 12 films in just a few years. â€œBy producing films that tell stories that matter, we help artists pursue their goals and share their vision. FWAP Partners With Filmmakers On Their Journey To Create Powerful Movies; at the same time, we are giving our filmmakers the tools they need to secure their path to a bright future, â€says Evers-Manly.

With his leadership, FWAP takes another step forward in promoting these three exceptional films with unique and compelling storylines that go unrecognized to audiences in Southern California. FWAP fully supports and solicits the public to support these talented independent filmmakers. Each of the films is dynamic and moving. One of the films is a real story, a documentary that started a worldwide movement. Another film tackles a rarely known historical fact, while another brings audiences face to face with a disabled child trying to thrive with drug addicted parents. The films are transcendent and courageous, full of hope, inspiration and a narrative about the history of an unrecognized people.

Next act for Marcel the Shell (and ...